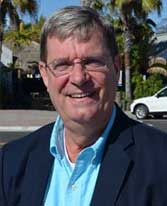 In preparation for City Council, I review the packet released prior to the meeting, research the topics, meet with City Staff, this month it was Sanitation Rate Structure Analysis with reaching out to other community representatives on their rate structures.
Working on a proposal for Short Term Rentals in Gulfport included Reviews of two competing software packages Granicus’s “Host Compliance” and Dekard’s “RentalScape”. I had demonstrations and read documentation of both products. In addition to the software I had conversation with other communities regarding their approach to STR’s including Compliance rules, Code Enforcement requirements, their usage of Internet AI internet scraping software identifying STR both legal and illegal,  Approaches for enforcement and their net results.

I had the pleasure of marching in the well-attended July 4 Parade, and attended the 1 Friday and 3 Saturday Art Walks.
As an effort in keeping up with what is going on I frequently listen to PODCASTS and attend Webinars and this month included ones on Affordable Housing, Short Term Rental Compliance, Infrastructure management, Monitoring and Planning in an volatile economic environment, planning for Smart Cities.

The second of my quarterly Town Hall Meetings was held at the Friends of the Library Room at Gulfport Library, some of the topics included a request to repaint with cooling paint the cement for the Dog Park which was completed since the meeting, Addition Dwelling Units and discussion of proposed solutions, request for traffic solution for 13 And Freemont during school traffics – study has been ordered to examine that intersection, request for a Demo and discussion on Recycling and will be done at October 12 Town Hall Meeting, and discussions on rental controls and what the City can and cannot do.

Gulfport City Council meetings were held August 2nd and 16th. Council discussed not raising the water rates and reviewing the existing and the proposed Water and Sewer Rate Structure.

Council also discussed and agreed to the suggestion of holding a Council Workshop that will be held on October 20, in Council Chambers at City Hall.  The focus of the workshop will be on rent affordability and short-term rentals. A workshop is an open to the public special Council meeting in which discussion is encouraged from the public and Council members on specific subjects. Preceding the workshop, I will be hosting an October 12th Town Hall Meeting at the Library at 6:30 PM where the discussion is open for all topics. The primary topic for the October 12th meeting will be Short Term Rentals and Rental Affordability. I am hoping for a big turn out on October 12th, come with ideas and suggestions that can be brought forward to the workshop.

I am always looking for leadership training and valuable topics that would give me insights into better representing the residents not just in my Ward 3, but the entire City. To that end, I attend various webinars and online meetings. In August, I attended discussions on ways to foster effective municipal services, which also covered interesting perspectives on negativity in relation to responses on social media and emails, etc. I also attended discussions on funding affordable local broadband, other leadership-based trainings, and grant sources for various infrastructure projects. Gulfport has an excellent record of applying for and securing grants. In the past few years, we have secured over 5 million dollars in funding.

I am a member of the Senior Center Fundraising Committee, we met in August to discuss potential donors, status, and future committee endeavors. I am pleased to say we are making remarkable progress.

As part of my continued research into the Short-Term Rental issues and Rental Affordability in Gulfport, I attended an in-depth demonstration of Deckard Technologies product RentalScape, software designed to assist in defining, tracking, and enforcing Short Term Rentals within the City. Previously, I met with a representative from Granicus to evaluate Host Compliance and STR Helper software, the two leading offerings.

During the month of August, I handled a significant number of issues for residents including code issues, complaints on neighborhood disputes, traffic issues, and others.

Now that budget season is behind us, there is time to reflect on how proud we are to have kept the millage rate unchanged. Though that reflection is significant, we now move on to other important City business.  During the month of September, I spent time doing additional research into Short Term Rentals and the Rental Crisis in preparation for the October 20th City Council Workshop which will be held at 6PM in Council Chambers. I would also as ask that you attend my October 12th Town Hall Meeting at 7PM in the Library meeting room. Hoping many residents will be present and willing to offer their valuable input.

Unlike our neighbors to the south, Hurricane Ian barely passed us by leaving us with minimal damage. We need to be grateful that we were spared. We can thank our City Manager and his team of City Workers for an amazing job throughout the emergency, from preparation, providing sand and bags for more than 16,000 sandbags before Ian’s arrival, to the cleanup process.

There are many different drives going on to help provide for the needs of those impacted by Ian so I ask you to locate one of those drives and donate either the provisions they are requesting or a cash donation. One event being planned will be held October 16th at Trolley Market Square, Party for the Paws Cause – A Free Benefit Concert & Pet Donations Drive.

Additionally, in September, I worked with residents on various issues from animal issues, neighbor disputes, traffic concerns, and public works requests. I also attended National Leagues of Cities webinars along with other city and state oriented webinars and podcasts.

Council Meetings were held on October 4 and 18.

I held a Town Hall Meeting on October 12. Most comments were regarding Code Enforcement and Short-Term Rentals, though the turnout was light, the residence that were present gave me valuable input on the topics. The next Town Hall meeting will be held in Mid-January.

The City Council held a Workshop October 20 addressing rental issues, specifically, Short-Term Rentals and rental affordability.  The outcome of the discussion was to direct staff to investigate what can be done legally. Additionally, the City will investigate how other cities are handling similar issues in their communities. In addition, it was decided to hire a second code enforcement officer and for City staff to determine which software package would best fit our needs when regarding Short Term Rental identification.

I spent time researching the Beach Drive Vacation issue that was reviewed by the Planning and Zoning Board on October 5 with recommendations to the Council.

Other activities this month included: