The Gulfport Fire Department is excited to announce that on April 6, 2020 the Rescue apparatus at fire station 17 was placed into service. The new vehicle is highly maneuverable in traffic and more adaptable on emergency scenes. This vehicle will be used for hurricane evacuations, transporting cardiac arrest patients, and trauma alerts when the county Sunstar Ambulance has a delayed arrival on scene. The new vehicle roll-out, which will be the newest addition to the life and safety operating fleet will bring with it significant cost savings, faster response times, and added flexibility at emergency scenes; all to better serve the City of Gulfport, Florida.

“Our department welcomes this critical piece of equipment that will improve the call volume for the safety of our residents,” said Fire Chief James Marenkovic. The department currently has two traditional non-transport engine vehicles. Gulfport Fire and Rescue welcomes the newest addition to the life and safety operating fleet, Rescue 17.

What is a push in ceremony? A traditional ceremony for the placing of new apparatus in service. There are several versions of this but it usually includes: pushing the old apparatus out, wetting down the new vehicle and pushing it back into the station. It may also include the moving of the bell to the new apparatus, photos, etc.

In 2021, Gulfport Fire & Rescue was awarded an ISO rating of 2. ISO (Insurance Services Office, Inc.) is the leading supplier of statistical, actuarial, and underwriting information for and about the property/casualty insurance industry. The ISO fire insurance ratings for a community are the foundation on which most insurers build their coverage programs. After looking at many factors, ISO assigns a Public Protection Classification from 1 to 10. Class 1 generally represents superior property fire protection, and class 10 indicates that the area’s fire-suppression program doesn’t meet ISO’s minimum criteria. A low ISO fire rating equates to lower insurance premiums citywide. For a one station department, Gulfport’s classification as a 2 is impressive as less than 3% of departments nationwide have classifications on 2 or less.

Essential elements a fire department must have to receive a Class 2 rating: 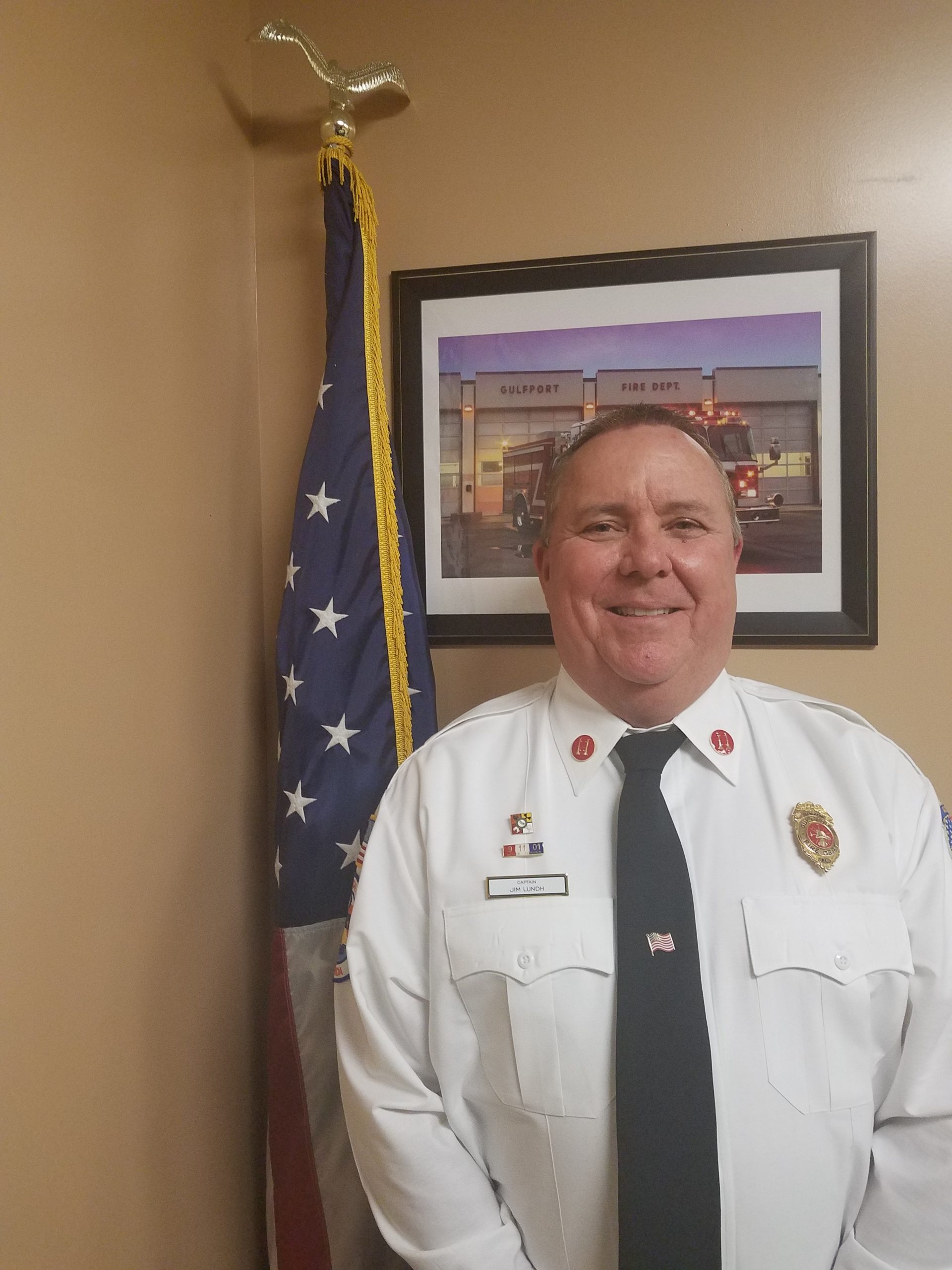 James Lundh is currently the Fire Department Fire Marshal/Inspector/EMT Captain for the City of Gulfport Fire Department. Captain Lundh offers a history of successful leadership in the fire service. His strong business acumen, system acuity and leadership talents are one of his many strong points. James is also very enthusiastic at work creating operational ideas and strategies. Most recently he retired from his 20-year career as a Fire Lieutenant with the City of Seminole where he held multiple professional positions. He also has previous years of experience at neighboring departments and was the part time Fire Inspector for the City of Gulfport for 5 years prior to his recent promotion. James was originally born in Miami Florida and moved to the area at a young age. He is a graduate of Boca Ciega high school and holds a Degree in Mechanical Engineering. Additional certifications include State Hazmat Tech, Fire Officer, Fire Investigator, Fire Instructor, Public information Officer, Crime Scene Technician, Pump operator, Fire Inspector, Plans review, Emergency Medical Tech and many NFPA/NFA classes. 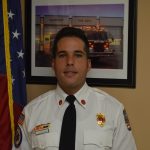 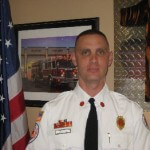 Lieutenant Erick Fuchs is currently assigned as the C- Shift Lieutenant and the Departments Logistics Officer. Lt. Fuchs began his career with the City of Gulfport in 1999 as a Volunteer Firefighter/EMT. He was hired full time in February 2002 and promoted to Lieutenant in March 2010. Lt. Fuchs is a certified EMT and serves as the Department’s Logistics Officer is in charge of overseeing the Station Supplies and Facility Maintenance. He also holds certificates as a Pump Operator, Fire Instructor 1, Fire Officer 1 and CPR Instructor with the American Heart Association, and an EMT Preceptor for St. Petersburg College. 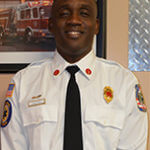 Lieutenant Gerard Grady is currently assigned as the B-Shift Lieutenant of Engine 17.  Lt. Grady began his career with Gulfport Fire Rescue in 2003 as a Firefighter/Paramedic.  He is a state certified fire officer and was promoted to Lieutenant in February 2016.

Lt. Grady is a certified Firefighter/Paramedic, and retains his EMT certification as well.  He is also a paramedic and EMT preceptor for with St. Petersburg College EMS program.   Lt. Grady also works a critical care flight paramedic for Express Air Medical on his days off.  Lt. Grady career as paramedic began in 2002 with Manatee County EMS.  Lt. Grady received fire training in 2003, then soon after was hired by Gulfport Fire Rescue. 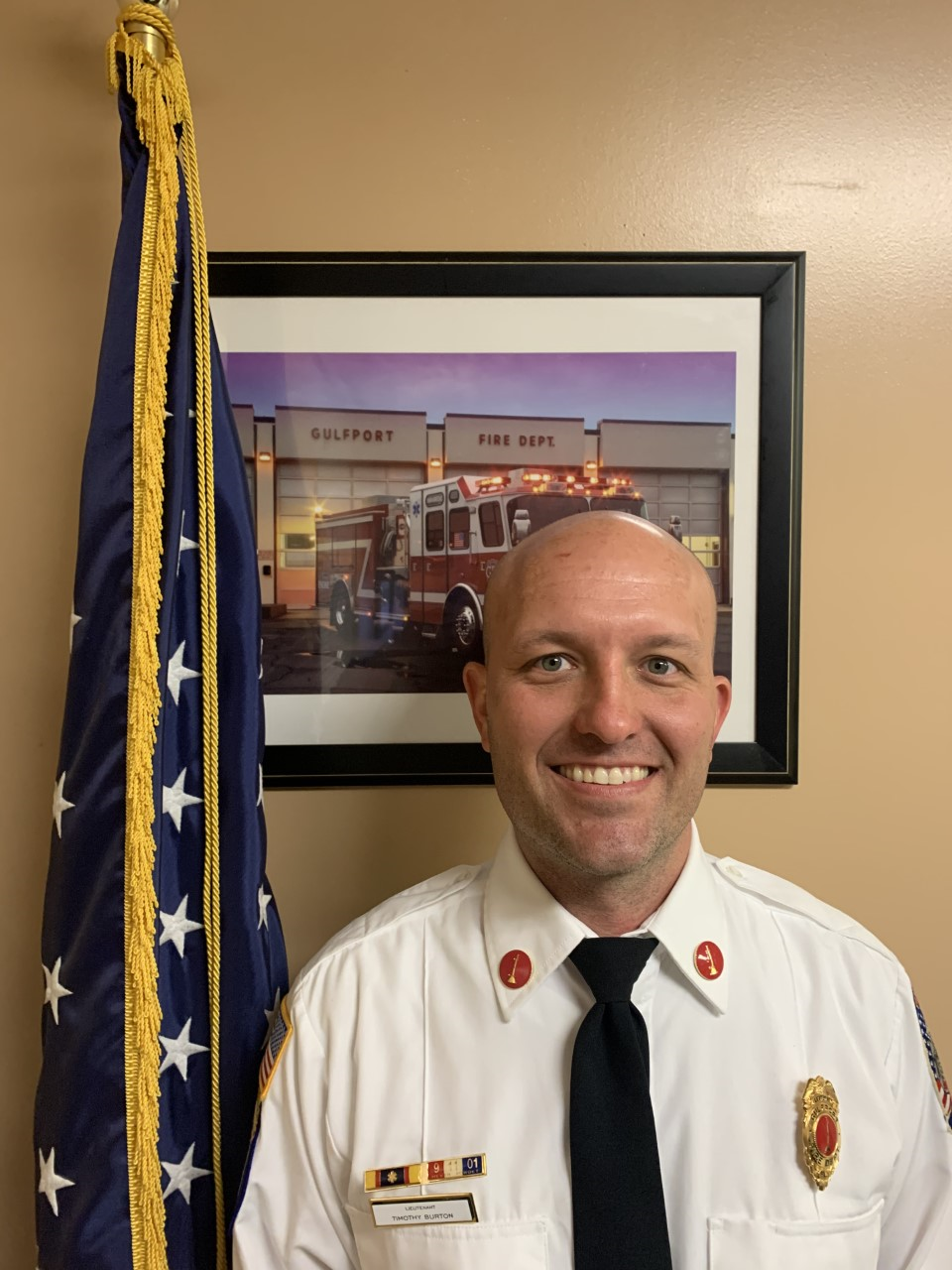 Lieutenant Timothy Burton is currently assigned as the A-shift Lieutenant for the City of Gulfport Fire Department. Lt. Burton began his career as a Paramedic for Sunstar in 2008, where he simultaneously completed the Fire Academy at Hillsborough Community College. In 2010, Lt. Burton accepted a position with Gulfport Fire Rescue as a Firefighter/Paramedic and was promoted to Lieutenant in January 2020.
Lt. Burton holds certifications as Pump Operator, Fire Instructor I and Fire Officer I, and is also ACLS and PHTLS certified. Lt. Burton currently oversees EMS inventory and is on track to earn an Associate’s of Arts degree from St. Petersburg College in May 2020.

Currently, Gulfport Fire Rescue has (2) 40 hour fulltime Fire Captains. One specializes in Fire Inspections/Fire Investigations and the other specializes in Advanced Life Support, Emergency Medical Services. Gulfport Fire Rescue has three shifts of five personnel operating an Advanced Life Support (ALS) Engine and Rescue. Gulfport Fire Rescue maintains five firefighters per shift that includes at least one Fire Lieutenant and one Paramedic. Each shift works 24 hours on and 48 hours off. The Fire Chief is responsible for the overall operation of the department. Each of the Fire Lieutenants is responsible for a specific area of supervision and coordination, Training, Safety, and EMS in addition to their shift supervision duties.

Gulfport Fire Rescue operates out of a single fire station and is responsible for the protection of 12,500 residents living within the City of 3 square miles. Additionally, the department participates in a County-wide Automatic Aid agreement with frequent fire responses into St. Petersburg and South Pasadena, and Mutual Aid responses into these areas and the beach communities of St Pete Beach and Treasure Island. Gulfport Fire Rescue responds to nearly 3000 emergency incidents annually.

The Community Emergency Response Team (CERT) Program educates people about disaster preparedness for hazards that may impact their area and trains them in basic disaster response skills, such as fire safety, light search and rescue, team organization, and disaster medical operations. CERT members will also be trained in CPR/AED and basic first aid. Using the training learned in the classroom and during exercises, CERT members can assist others in their neighborhood or workplace following an event when professional responders are not immediately available to help. CERT members also are encouraged to support emergency response agencies by taking a more active role in emergency preparedness projects in their community. Gulfport CERT meetings are held every third Monday of the month at 7 p.m. CERT meeting locations will vary due to the type of scheduled training for the month. For more information, please contact (727) 893-1022 or (727) 893-1062.