For the past several decades Gulfport has been spared a direct hit from a hurricane. Although several hurricanes have brushed by this area within the past 60 years, Pinellas County and the City have not experienced the devastating winds, high storm surge, erosion, and flooding caused by a landfalling hurricane for years. Historically, the last hurricane to make landfall in the Tampa Bay area occurred in October 25-26, 1921. The sixth hurricane of that year began in the western Caribbean, moved through the straits between Mexico and Cuba, and entered the Gulf of Mexico. As the hurricane traveled north, it curved to the east, making landfall in the area of north Pinellas County/south Pasco County as a Category 3 hurricane. Locally, the hurricane generated winds of upwards of 120 mph. The hurricane then cut across to the east coast and exited the State of Florida in the vicinity of New Smyrna Beach. 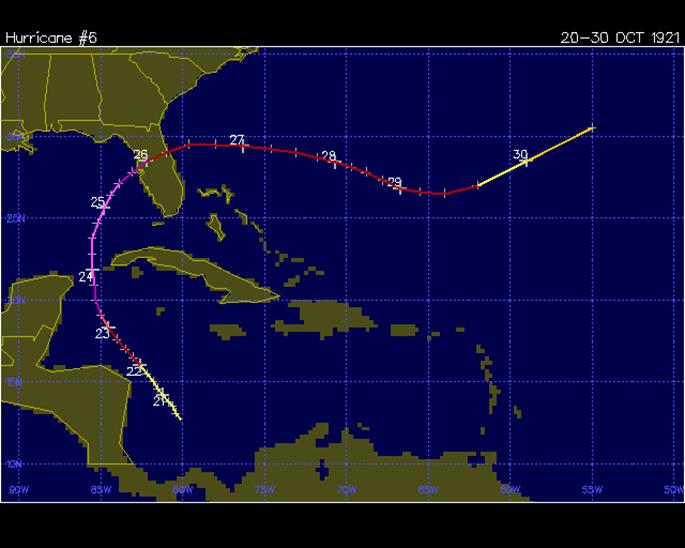 In 1921, Gulfport, like most of Pinellas County, was sparsely populated. Therefore, property damages and losses of life were relatively low compared to today’s development patterns. Gulfport residents who lived through this intense hurricane reported the exceptional high winds and the high storm surge that flooded most of Gulfport from the shores of Boca Ciega Bay to what is now Gulfport Boulevard. As the hurricane passed, the hurricane force winds shifted and blew the water out of Tampa Bay and Boca Ciega Bay leaving much of the bottom of both Bays exposed. The historical photographs that you have seen throughout this webpage were taken during Hurricane Elena, August 30 – September 4, 1985. Hurricane Elena threatened Florida’s west coast on Labor Day weekend as Elena’s path came to approximately 80 miles to the northwest of the Tampa Bay area. Locally, Elena had 40 to 50 mph sustained winds that caused tides six and seven feet above normal. The high tides and heavy wave action caused moderate to severe beach erosion, flooding, and damage to seawalls along the beach areas from Sarasota northward to Clearwater Beach.

Gulfport’s Municipal Beach also experienced erosion. Evacuation orders were given in Pinellas County that included parts of Gulfport. The Gulfport Fire Department, in a coordinated effort, assisted 112 evacuees and answered 63 citizen calls. Rainfall amount recorded in Gulfport totaled 5.35 inches. Finally, the hurricane made a loop off Cedar Key and then headed northwest making landfall near Biloxi, Mississippi. In more recent times, three storm events have affected the City of Gulfport. Each created flooding situations within the City. March 13, 1993 saw the “No Name Storm” which was referred to as the “Storm of the Century” by the media. Two inches of rain and a strong tidal surge of nearly 5.5 feet above mean sea level caused heavy damage, erosion, and significant coastal flooding. Major wind damage was caused by sustained winds of over 40 miles per hour and gusts over 80 mph. The high winds caused long term power outages. During October 6-8, 1996,

Tropical Storm Josephine unleashed heavy rains, high winds, and high tides in Pinellas County even though the eye was nearly 150 miles north of Gulfport. Rainfall combined with high tides up to 6.3 feet above normal caused flooding within the city’s floodplain. The City of Gulfport recorded over three inches of rain from this storm.

Then, during September 14-18, 2000, Hurricane Gordon peaked on the 17th about 165 miles southwest of Tampa, Florida. It continued to track northeastward and eventually made landfall just northwest of Cedar Key, Florida on September 18th, as a tropical storm with 55 knot winds. Gordon dumped nearly four inches of rain as it passed Gulfport. Although not directly impacted from a major hurricane since 1921, Gulfport has been affected by passing tropical storms and minor hurricanes. With these storms, Gulfport has experienced high tides and limited storm surges, heavy rains, and some high winds. Effects from the passing storms have caused some damages, but not to the extent of what could be flooded and damaged from a major hurricane. Gulfport and the Tampa Bay area have been very lucky by not experiencing a major hurricane since 1921. However, this does not mean that our luck will continue.

It’s not a matter of IF we’ll get hit with a major hurricane, but a matter of WHEN. Therefore, it’s everyone’s responsibility to be prepared every hurricane season. So what can you do to prepare?

Back to Hurricane Center