The purpose of the Resource Center is not only to provide a welcoming communal space to the large LGBTQ population of Gulfport and Pinellas County, but also to establish a sense of awareness  and advocacy for a segment of the Gulfport community that is ingrained in the very fabric of the community; it’s history, unique sensibility, and accepting creative spirit. The LGBTQ Resource Center is a is a 501 (c) 3, non-profit. 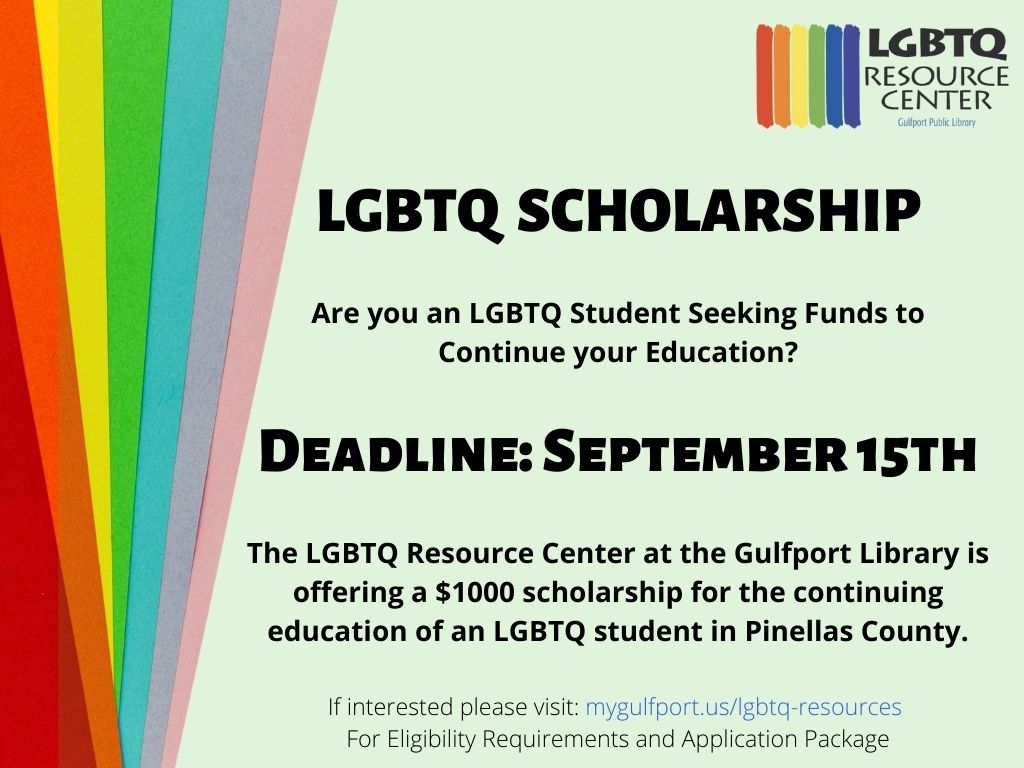 Cheryl Head, Kristen Lepionka, and J. M. Redmann discuss their work as queer authors who write private investigator (P.I.) series with LGBTQ protagonists, including their writing process, how they choose series themes, how they select stories, and what their stories and protagonists bring to the genre. Audience members will be able to ask questions. This event is for those interested in literature by, for, and about lesbians across the spectrum of social identities. 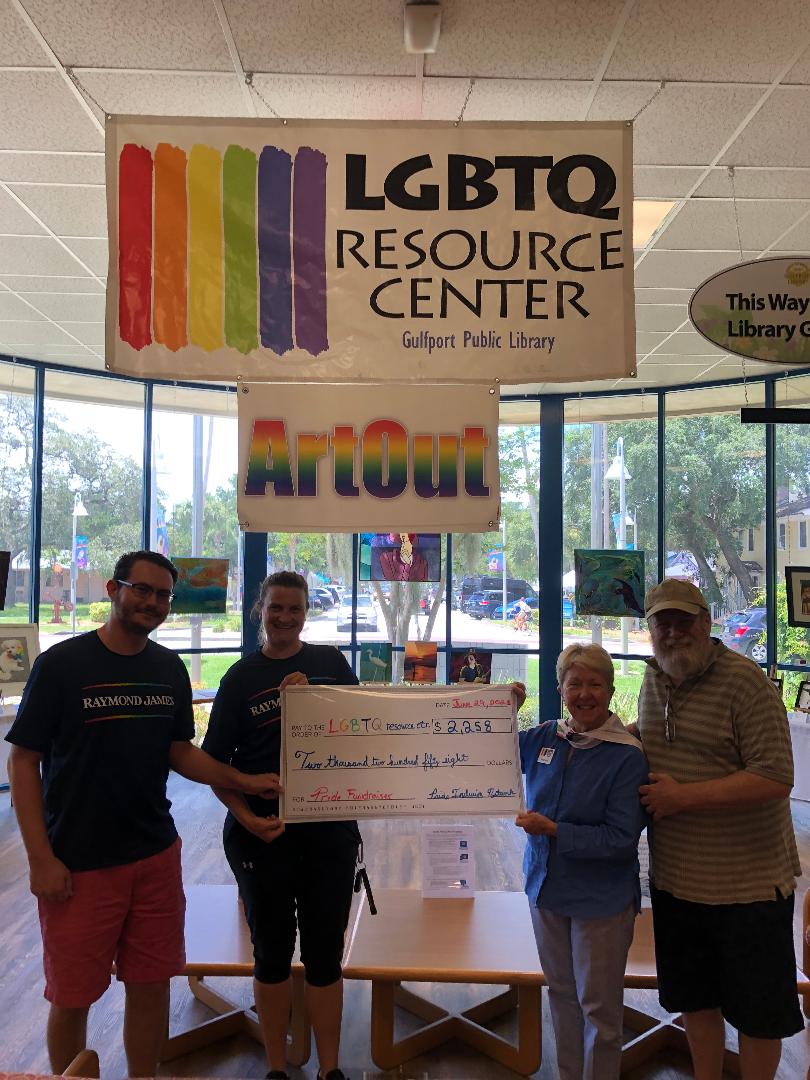 Gulfport artists who participated in ArtOut 2021 proved Covid-19 would not keep them down. ArtOut 2021 opened to an excited audience of over 100 visitors on the first evening and many more throughout the month of June. There were 19 artists exhibiting 48 pieces of art ranging from photography and metalwork to acrylics and watercolors. This was the first year that we also had a virtual exhibit which showcased part of the exhibit.

ArtOut 2022 will benefit from the progress made for ArtOut 2021. Registration for ArtOut 2022 will open up in early 2022 and will be completed throughout the online site so that all of the artists can participate in both the virtual and physical exhibit. More information will be coming thru the ArtOut email, thru the LGBTQ Resource Center MailChimp emails, thru flyers in the library lobby, and thru ShoutOut early in 2022. Stay tuned! ArtOut 2022 is on the horizon…let inspiration flow.

The LGBTQ Resource Center continues to be an important and viable source of information about our community. As part of that mission, we have been honored to offer free movies each month on a variety of topics of interest in our community. We had planned to offer the classic film “Paris is Burning” for August. Unfortunately, the crisis in the Covid epidemic here in the “hot spot” of Florida has forced us to cancel this in-person screening at this time.  Get vaccinated! Please watch your email for updates in this rapidly changing environment. Stay safe beloved friends!

Paris Is Burning has been CANCELLED due to the resurgence of COVID. Instead, watch the SF Gay Men’s Chorus video and get vaccinated!

Your Resource Center has been grateful to many groups and organizations who have recently donated both time and money to our bottom line. Donations have come from civic events (SIK Promotions donated money from the Pride Artwalk), from the corporate world (Raymond James is a wonderful supporter with both money and volunteers) and even a thousand-dollar check from Different Church, a welcoming and inclusive faith-based organization.

Our award-winning reputation and strong support from the Gulfport Library, your city council and YOU continue to capture the attention of donors. Our long-range plans include some truly community-altering initiatives. We’ll keep you posted!

Summer in Florida is always a long, sweaty affair, punctuated by afternoon cloudbursts that create steam heat. Staying inside is the rational thing to do, even as COVID-19 restrictions ease. Still, your Resource Center Board has been busy inside and out-of-doors with continued ReadOut programming, June Pride events and discussions spurred by growing public recognition of our work. Highlights include:

The Resource Center is honored to be the beneficiary of Gulfport’s first official LGBTQ Pride celebration! Thanks to SIK Promotions and LocalShops1 for pulling May 29 together, with the support of Gulfport’s Mayor, City Council – and the Library, home to the only LGBTQ collection in a public library in Florida!

Waving our flag Proudly Out Gay City Council member, Paul Ray, kickstarted the celebration by raising the Progress Pride flag at the Gulfport Library on May 29. The blue-pink-white triangle in the Progress Flag pictured below celebrates transgender pride, while the black and brown stripes honor the Black Lives Matter movement. 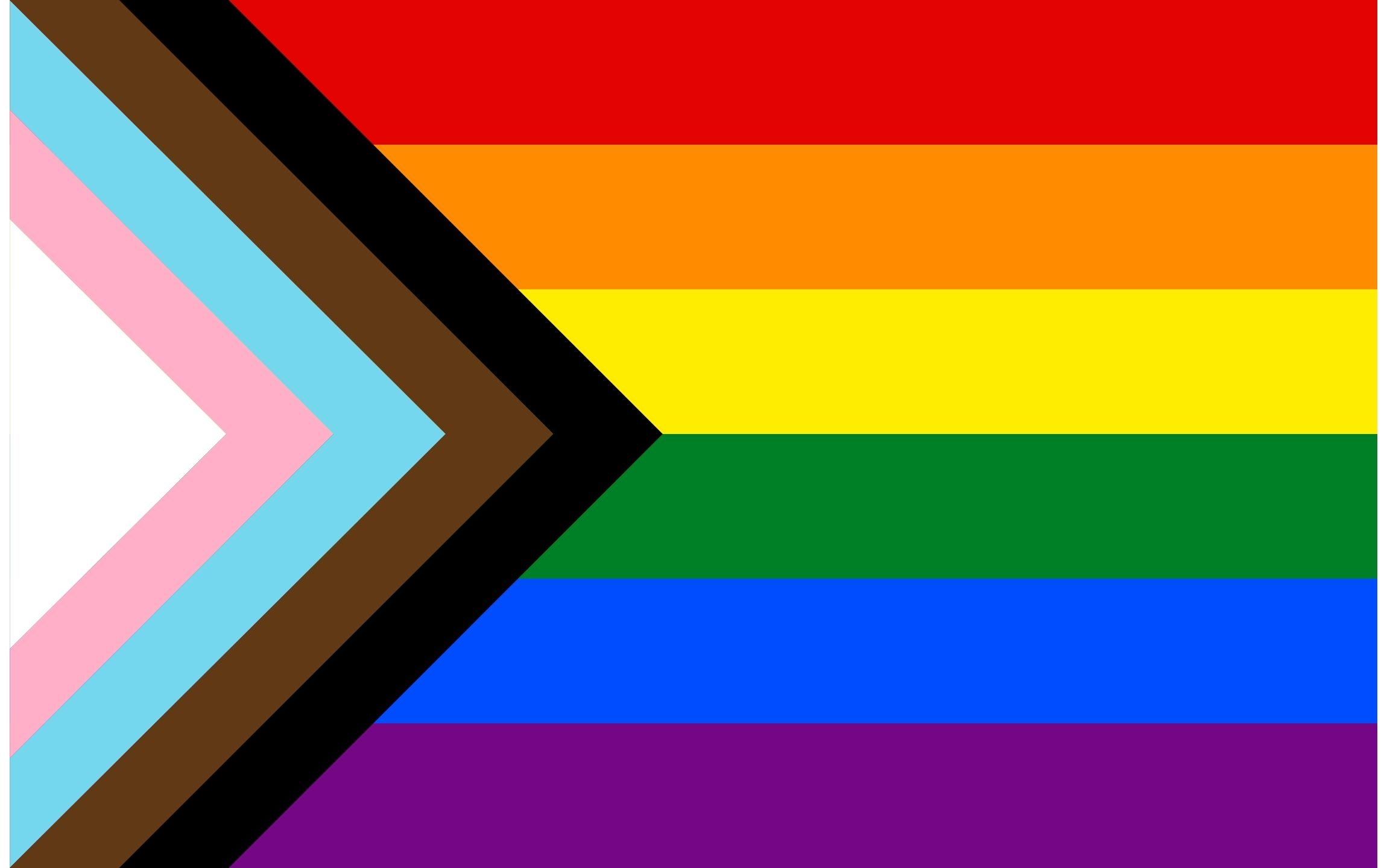 The Progress Pride flag isn’t even the latest example of “drawing the circle bigger” to include marginalized identities. Morgan Carpenter of the advocacy group, Intersex Human Rights Australia, introduced the addition of a purple circle on a yellow background to bring attention to non-consensual sex assignment surgeries in the US and around the world. Yes, they still happen. Image from: By Paul2520 – paul2520 created the SVG based on the original Daniel Quasar version, which was released under a Creative Commons Attribution-NonCommercial-ShareAlike 4.0 International License [1]., Public Domain. 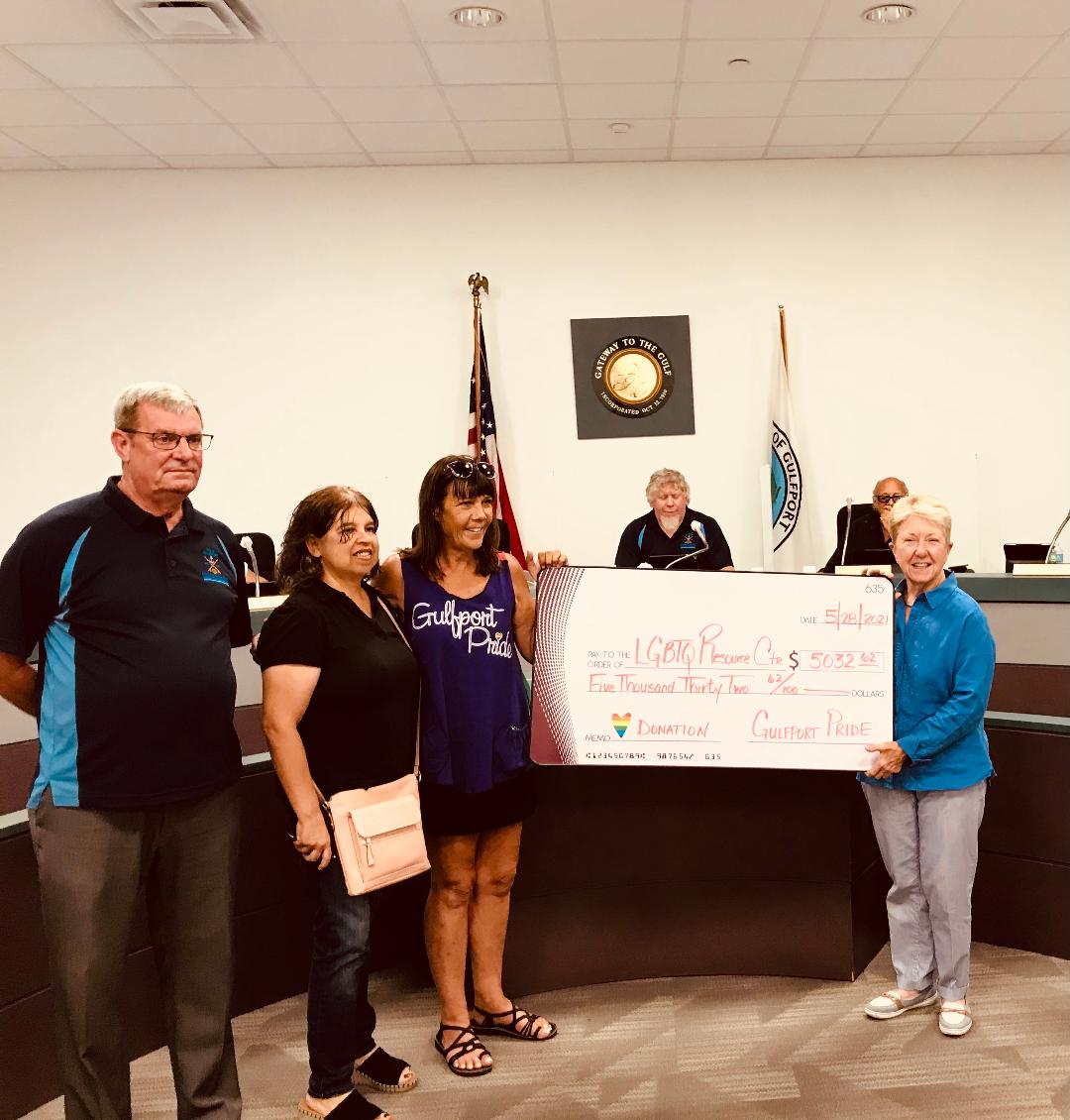 ArtOut, the Resource Center’s month-long celebration of the intersection of art and LGBTQ identity, also opened to more than 100 admirers on May 29. Deep bows of appreciation go to Beryll Taylor, who organized ArtOut, and all who helped with hanging and promoting the show.

It’s a Parade! Immediately following the flag ceremony, the Amalgamated Gecko Marching Band stepped off from the Gulfport Recreation Center, joined by Police, Fire and other City service vehicles – and a surprise contingent of decorated golf carts. Nonprofit organizations and local businesses filled booths on both sides of the street, offering everything from pamphlets and tchotchkes to organic honey.

On June 23, Raymond James Pride Inclusion Network added their support with Virtual Drag Queen Bingo, hosted by the dazzling Alexis de la Mer, and benefitting the Resource Center. Tampa-based “RayJ” has a history of supporting LGBTQ issues, earning it a 100% rating on the HRC’s Corporate Equality Index. Read more about our budding collaboration. Thank you, RayJ!

Together, these events yielded more than $5500 in donations, which helped offset the cancellation of the Center’s main fundraiser of the year due to COVID. Thank you to all who participated!

Pulse Anniversary June 13 sounded a more somber note as we commemorated the 5th anniversary of the Pulse nightclub massacre. The Pulse shooting and ongoing violence, particularly against transgender women of color, demonstrated yet again that progress in recognizing the inherent humanity of LGBTQ peoples is dangerously uneven.

Cured The Resource Center wrapped up Pride Month on June 29 with a hybrid event on June 29 with a discussion of Cured, a documentary about the 1970s campaign to get “homosexuality” removed from psychiatry’s manual of “mental illnesses.” Psychologist Dr. Harold Kooden described lobbying within the APA, while Stonewall veteran Jay Chetney spoke about the impact of public protests on changing hearts and minds.

ReadOut’s explosive growth in February continues to spark well-attended virtual programs. See sidebar for details of past and upcoming events. Thank you to all who dared envision a virtual event, as well as those who have continued the good work!

ReadOut 2022 Want to help plan a hybrid version of ReadOut for the 5th annual festival? Expertise in social media marketing, video production and fundraising are especially needed as we expect to reach an even bigger worldwide audience than this year on Feb. 18-20, 2022.

Once again, the LGBTQ Resource Center is proud to offer a $1000 scholarship for an LGBTQ student who lives, works or goes to school in Pinellas County, FL. The application deadline is September 15. Please help spread the word using this link: LGBTQ Scholar Application | City of Gulfport (mygulfport.us)

Our mission is “promoting awareness of the diversity of experiences, contributions and needs of people who are lesbian, gay, bisexual, transgender and/or queer.” While Gulfport genuinely welcomes LGBTQ people and allies, Florida is not a leader in support for equity. Please help us reach out with programs that celebrate, educate and support LGBTQ communities by becoming a member and/or donating to the LGBTQ Resource Center today at LGBTQ Resource Center Membership | City of Gulfport (mygulfport.us)

Thank you for the visible and invisible ways you move that mission forward, too!

Originally hailing from Columbus, Ohio, Greg Stemm has been a Pinellas County resident for 38 years, the last 21 in Gulfport. He graduated with honors from a small liberal arts college, Otterbein University, where he was the youngest elected student trustee, a position that gave him full voting rights on the university’s board of directors.

Greg’s first job in St. Petersburg (right out of college) was as media and marketing director for the Festival of States. There, he managed a full-time staff of six, producing over 200 events in a three-week period for a national high school band competition. It was a perfect fit, since Greg had been a trumpet player in marching bands since junior high school. The Festival also included three major parades. Little did Greg know his parade production experience would be put to use 30 years later in organizing St. Pete’s first Gay Pride parade.

Greg went on to serve as the vice president of marketing for the Pinellas Economic Development Council, as an account executive for Apple Computer, as the CEO of a small training company and eventually as President of his own marketing and PR firm, GDS Enterprises.

After moving from St. Pete to Gulfport in 2000, Greg quickly became part of the local community. He served as president of the Gulfport Chamber and covered city hall for the free news weekly, The Gabber, for five years. Greg also volunteered on the Senior Center Foundation board of directors and the Gulfport Centennial committee. Some may know him from his campy character “Gregorio,” who flamboyantly interviews costumed participants to the annual Gecko Ball on the “red carpet.”

Greg is an outspoken activist, with a focus on LGBTQ rights and HIV issues. He is a founding board member of St. Pete Pride, serving as the inaugural parade chairman in the first two years of the celebration. He then became its first paid executive director. He has written extensively for Watermark, a bi-weekly LGBTQ news magazine, and has a regular column dubbed “Positive Living.”

Greg is proud to say he is a 28-year survivor of HIV. A doctor told him when he was 31 it was “unlikely” he would live to be 40. At 60, he has proudly defied those odds. He is outspoken on initiatives to reduce stigma associated with the disease, giving media interviews and speaking to groups about his experiences as a long-term HIV survivor.

It would be impossible to talk about Greg without mentioning his deep and abiding love of Quakerism. He is a former clerk of the St. Petersburg Meeting of Friends and is currently the clerk of the pastoral care and council committee. He has found a home among a group of spiritually lead activists like himself in a faith-based community that warmly embraces LGBTQ members.

Greg says his primary motivator for LGBTQ activism comes from growing up as a lonely, scared gay youth in the cornfields of Central Ohio and whose coming out to his parents was a homophobic nightmare. For Greg, everything he does is to make it easier for another scared and lonely youth somewhere to feel loved and included in a welcoming community.

Greg has served on the LGBTQ Resource Center board of directors for more than two years. He expertly manages the organization’s participation in community-wide events and was recently named editor of the group’s quarterly newsletter ShoutOut.

Greg lives in the heart of Gulfport with the love of his life, a three-year-old Chiweenie named Joy. 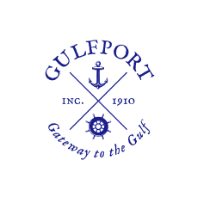