The City’s Utility Customer Service Department is located at the City Hall Complex at 2401 53rd Street South and is open Monday through Friday from 8:00am to 4:30pm. You can also reach the Customer Service Department by dialing 893-1016. There are convenient locations where you can drop your utility payment off. During normal business hours at the Customer Service window, and after hours you may drop payments at the drop box located by the front door of the City Hall Complex. When paying your utility bill in person or dropping off the payment, please bring or enclose your utility stub to ensure accurate payment processing.

The Water Department responsibilities include the operation, maintenance and repair of the City owned potable water distribution system. The water distribution system consists of 38.5 miles of 1½-inch to 4-inch pipes, 27.3 miles of 6-inch to 12-inch pipes, 5,723 water meters, 467 backflow preventers and 386 fire hydrants and consumption averages 6.7 million gallons per week. The water is provided by the City of St Petersburg.

For Recycling pick up information, times, and days please call the Public Works Department at (727) 893-1089 or visit https://mygulfport.us/public-works-department/residential-sanitation-service/. 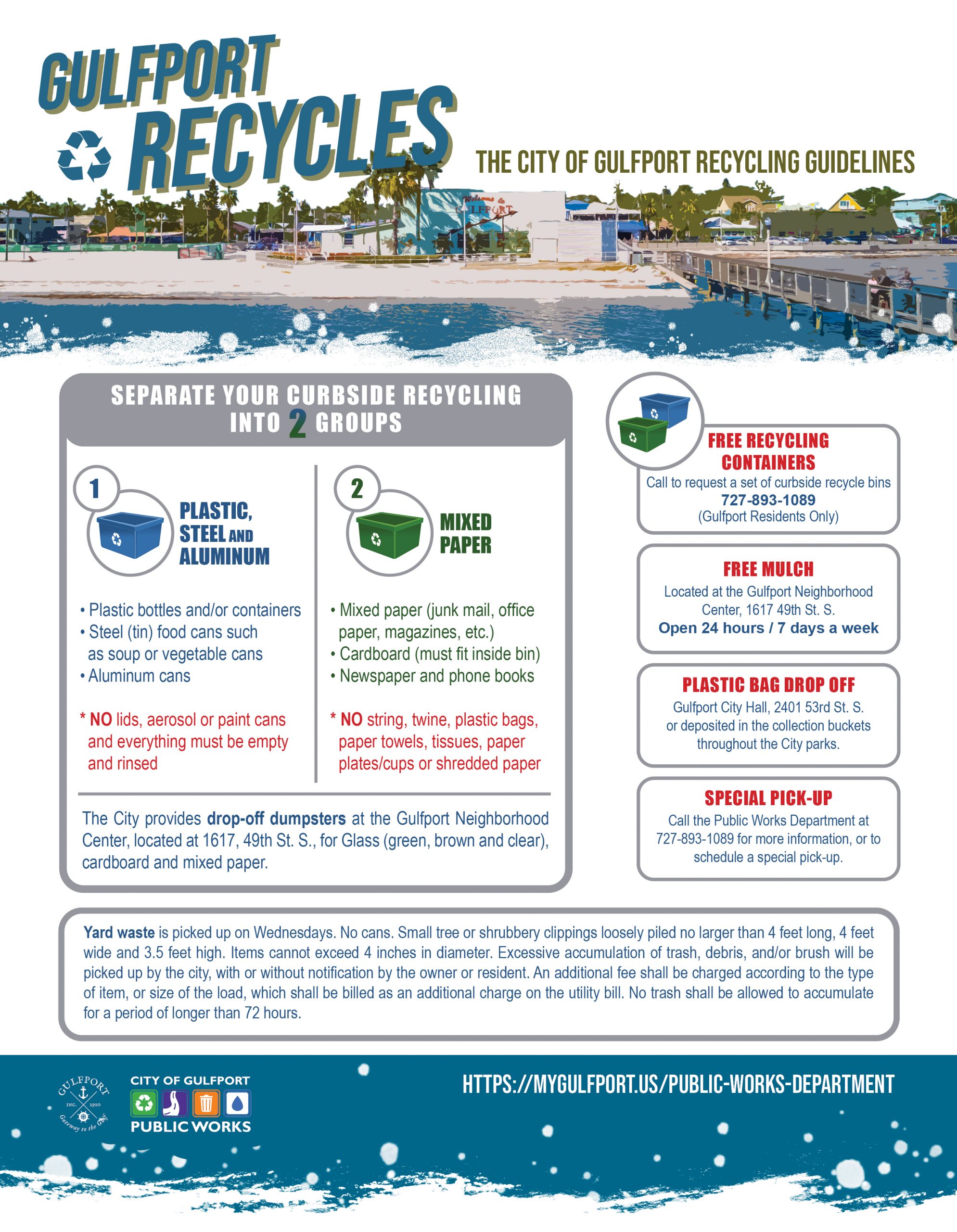 City Garbage collection is provided twice a week, either Monday and Thursday or Tuesday and Friday based on your residential address. For Sanitation/Recycling pick up information, times, and days please call the Public Works Department at (727) 893-1089 or visit https://mygulfport.us/public-works-department/residential-sanitation-service/.

The City of Gulfport presently purchases and receives wholesale water and waste water services from the City of St. Petersburg under a long-term wholesale water and sewer inter-local agreement. Water is purchased at a wholesale rate from the City of St. Petersburg through the Tampa Bay Water Authority. The City of Gulfport’s rate structure supports a water system that supplies clean potable water to homes and business located within the boundaries of the City as well as a portion of the unincorporated area of Pinellas County. The City maintains watermains, service lines, valves, hydrants, meters and backflow devices, as well as reading water meters and performing water quality and water leak inspections. The City’s rate structure supports a sanitary sewer system, i.e. wastewater collection system composed of laterals, mains, and lift stations as well.

Southwest Florida Water Management District (SWFWMD) issued an executive order that affected all Pinellas County municipalities by October 1, 2001 to reduce water consumption by 5% through the use of various conservation methods. The main emphasis was placed on altering the City’s rate structure to provide for increasing rates for higher consumption in an effort to provide a monetary incentive (lower water bills) for conservation efforts of high-end users. This structure was implemented with the first billing in November 2001 and 52% of the residents who averaged less than the 3,000-gallon threshold at that time were not affected by the new structure.

On August 2, 2022 a utility rate restructure study was presented to City Council in an effort to repeal the minimum bill requirement, consisting of 2,000 gallons, and introduce a new structure comprising of a base rate plus volumetric charges. This structure was adopted and implemented with the first billing in October 2022 and residents who consume more than the 2,000-gallon threshold will not be affected by the new structure.

The new rates (adopted October 2022) are depicted below: 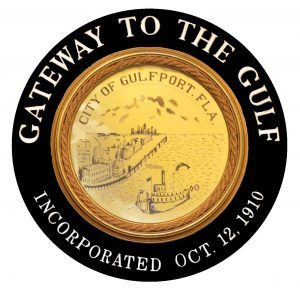 Although the City actively pursued this option, the supplier (City of St. Petersburg) has determined that it will not expand this alternative water source to the City of Gulfport. Although discussions with the City of St. Petersburg continue, if the program is adopted the costs associated with the expansion of the distribution system would be financed by the end users. Currently, it does not appear this service will be available in the near future.

Utility bills are generated every month. Billing statements used by the City show all the component charges and the actual consumption.

Bills are due and payable when rendered. If payment is not received within twenty-one (21) days after the billing date, it is considered late and is assessed a delinquent charge in the amount of 5% per month on the unpaid balance. If service is disconnected, there will be a $30 reconnection fee and the entire account balance must be paid in full to have service restored.

If you are building or refilling a pool, the City has a program designed to adjust the sewer component of your utility bill. You must contact the Utility Customer Service Department to have the Water Department read the meter before and after the pool is filled. There is a $22.00 charge for these extra readings. Therefore, based on the current sewer charges, this program is not cost beneficial unless your pool is over 3,000 gallons. This service is not available to residents that are on the Pinellas County sewer system.

For your convenience, the City of Gulfport accepts the following forms of payment:

• Credit/Debit card payments – Credit/Debit card payments may be made in person, by phone, or online. We accept Visa, Mastercard, Discover and American Express.
• Cash or Check – accepted by mail, in person, or in the drop box located outside of City Hall
• Direct Debit – Automatic payment of your utility bill from your checking or savings account

As of October 1, 2020, all new accounts (owner or tenant) must pay a utility deposit of $200.00. This refundable deposit is applied to the last utility bill and the remaining balance will be refunded when your service is disconnected. Commercial and multi-family account utility deposits are calculated based on two (2) times the estimated monthly utility bill for the property.

What To Do If Your Water Consumption Is Higher Than Normal

What To Do If Your Water Consumption Is Higher Than Normal

Leaks in your water distribution system are sometimes easy to detect by the sound. The most common leaks occur in the toilet. If there is a leak, the water level in the tank will normally remain low long after a flush therefore, the ball float never raises high enough to close the valve and the water runs continuously.

Some leaks in the toilet system can be very slow and more difficult to detect. However, one excellent method of spotting a slow leak is to put a couple of drops of food coloring into the tank. Leave the toilet untouched for an hour or so. If the coloring shows up in the bowl, it means the water is seeping past the ball stopper and the flush system is leaking. Test tablets are also available at the Utility Customer Service window during normal business hours.

You may also check for leaks by making sure all the water is turned off in the house and ensuring that all outside faucets are off. After confirming that all faucets are off, locate your water meter and determine if the dials are moving. If any of the dials are moving and all water is off, you have a leak somewhere from your meter to your house. If no faucets or toilets have a leak, a plumber should be called to review your system.

If you have any questions or concerns, you may contact Utility Customer Service in person, by phone, or by email during normal business hours.

Providing reliable power is a priority for Duke Energy. However, sometimes there are circumstances beyond our control when you will lose power. This tool was created to help you monitor and track outages – helping you plan around this situation. Some of the features you can take advantage of include:

Click the button below to go directly to https://www.spectrum.net.